Students must present a birth certificate issued by the State Bureau of Vital Statistics in the state in which he or she was born, or a state-certified copy of the birth certificate, as well as their Social Security number to their coach or to the Athletic Director. A photocopy of the original birth certificate is NOT acceptable. This needs to be done only once during the athlete's career at The Montgomery Academy, but it must be done at least 10 days prior to the first contest the athlete will participate in. The birth certificate may be turned in at the first of the school year, even if the student will not participate until the spring. If you are a transferring student, foreign exchange student or have any questions regarding your eligibility to play sports at the Academy, please contact Athletic Director Robert Johnson.

All students must have a current physical examination as well as permission, injury waiver and travel forms on file with the Athletic Director in order to compete in any sport sanctioned by the Alabama High School Athletic Association. This means that a student/athlete must have a new physical completed each calendar year. Physicals are available to all athletes through the school late each spring. Students are encouraged to take their physicals at this time even if they do not plan to participate until the winter or spring. Students may have their own physicians complete the physical forms. These physicals must be done on an AHSAA form available from the athletic coaches or the Athletic Director.

Students entering grades 10-12 must have passed during the previous school year at least six new full Carnegie units. A new Carnegie unit is a course that has not been previously passed. They must have a minimum composite numerical average of 70 in those six courses. Four core curriculum courses must be included in those passed and averaged. Any students who accumulate more than four core curriculum courses per year may earn less than the four core courses the next school year providing that the student remains on track for graduation with his/her class.

To be eligible for interscholastic athletics in the current year, students in grades 8-11 must be carrying at least six new courses at the school they represent. Seniors, who are on track for graduation and have earned more units than required, must be carrying a minimum of four units of work.

Students transferring to The Montgomery Academy and entering grade 7 for the first time are eligible. This is regardless of where they transfer from or where they live. Receiving financial aid from the school would be the only factor that could rule them ineligible.

Students transferring to The Montgomery Academy and entering grades 8-12 will be ineligible for one calendar year in varsity athletics unless they have made a bona fide move from outside our school district. They can be eligible for junior varsity and middle school athletics unless they receive financial aid. Our district is the city limits of Montgomery, Ala. If a transferring student has made a bona fide move into our district, the student must meet the following criteria to be eligible: (1.) Must have met the course and grade requirements of the AHSAA, and (2.) must not be receiving financial aid from The Montgomery Academy. A student transferring from a nonmember school (Alabama Independent School Association) will be eligible at any grade level providing he/she lives within the city limits of Montgomery, Ala. and meets the above requirements.

All rules are subject to change at the discretion of the AHSAA.

The Montgomery Academy expects everyone within our school community to demonstrate good sportsmanship and a sense of fair play during all athletic events. The NFHS Sportsmanship Philosophy Statement expresses that "Individuals, regardless of their role in athletics, are expected to be aware of their influence on the behavior of others and model good sportsmanship." This philosophy correlates strongly with the academy’s core values, including our belief in shaping well-rounded leaders and our belief in leading lives of honesty, integrity, and respect. When we don the cardinal and navy, we represent every core value of the academy, and should adhere to the mission of the school. As competitors, coaches, administrators, or fans, we are influencing the experience of others who are experiencing athletic contests alongside us. We should work to use that influence in a positive manner. 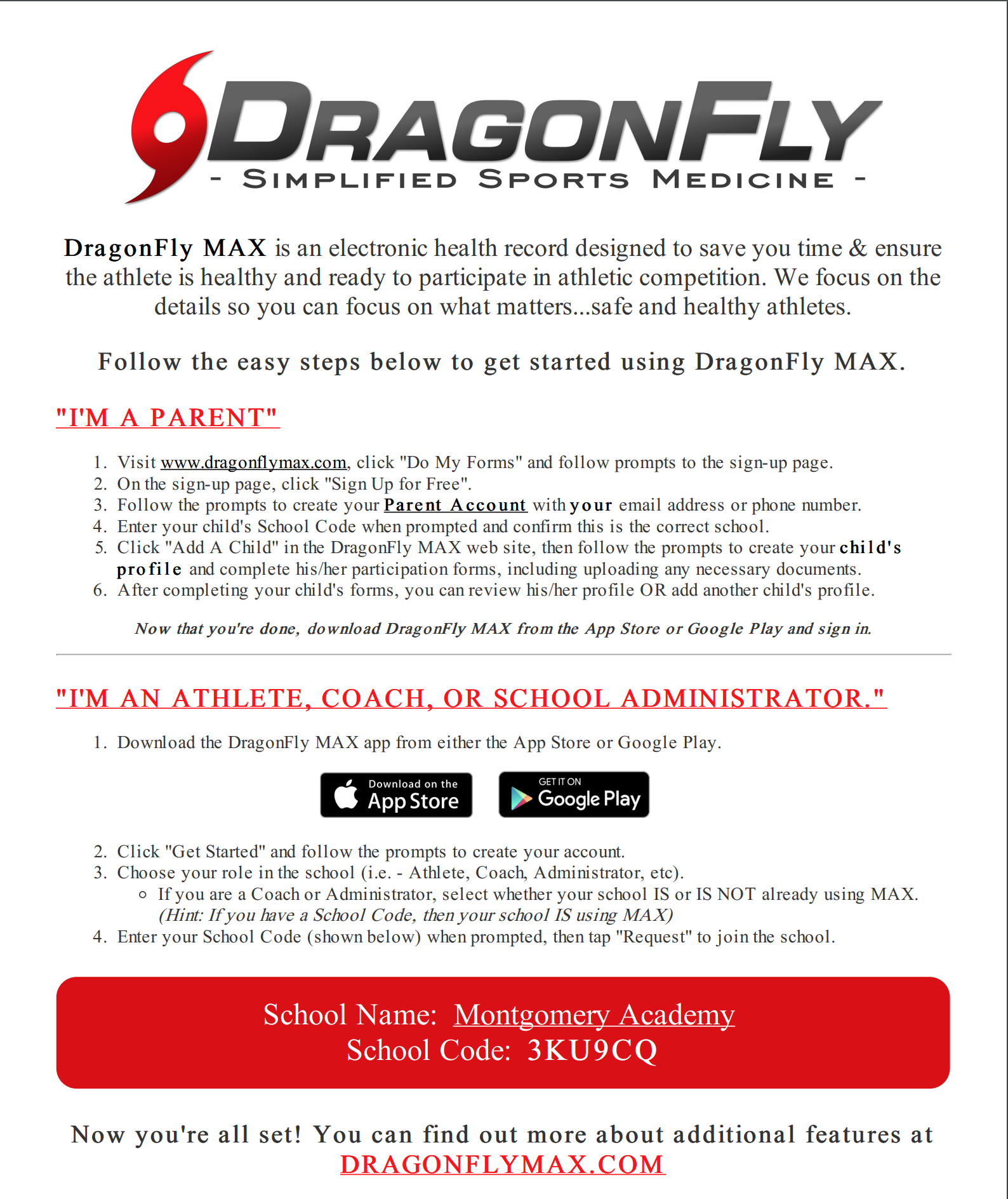 Function
The AHSAA, providing a vehicle which member schools may write their own rules and regulations, determines that schools are abiding by those standards in such areas as student eligibility, contests and championship programs. Another basic function of the AHSAA is the registration, training and regulation of officials. Only officials registered with the Association are used for contests involving member schools.

Organization
The rules-making body of the AHSAA is the Legislative Council, composed of eight district boards made up of four members each elected by member schools in each district. The 32-member Council has the authority to make changes in the Constitution and By-Laws. The executive board with the final authority in AHSAA matters is the Central Board of Control, consisting of one member of each district board, one board member from each of the four bi-districts, and one representative from the State Department of Education. The operation of the AHSAA is the responsibility of Steve Savarese and his staff. Savarese became only the fourth full-time executive director August 1, 2007, after the retirement of Dan Washburn, who had served since 1991. He was preceded by Herman L. (Bubba) Scott, who has served since 1966. The late Cliff Harper was the first AHSAA head in 1948 with the establishment of a State Office in Montgomery. Prior to that, Sellers Stough of Birmingham had served as director on a part-time basis.

History
The AHSAA joined the National Federation of State High School Associations in 1924. The National Federation, both a service and regulatory organization controlling interstate athletic events, helps the 50 state association members secure the benefits of cooperative action through the pooling and coordinating of ideals of all who are engaged in the administration of high school athletes. The AHSAA merged with the Alabama Interscholastic Athletic Association in 1968, forming one high school athletic association for the State of Alabama in accordance with a court order relating to athletics. The AHSAA sponsors state championships programs in 11 boys and 11 girls sports.